Covid: ‘Up and at em’ The Over 65s show us the way, exercising more in lockdown 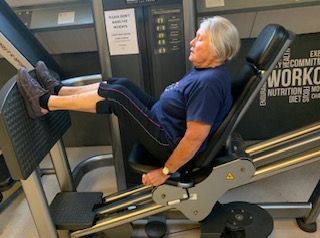 Margaret, a 77-year-old Boldie, is a member of a friendly community gym in Cambridgeshire, which she goes to at least a couple of times a week for both the physical activity and social interaction. The first national lockdown in the UK was not going to keep her from getting her fix of daily exercise, as she explains in a recent [**BeyondBold**](https://theboldage.com/bold-podcasts) podcast.

During lockdown she took long walks in the local area and got stuck into the gardening during the glorious spring and summer weather. As soon as lockdown came to an end she was straight back into the gym. Not only for the physical exercise but for the much-needed social interaction which helped reduce the feeling of isolation and loneliness.

She is not alone. She is part of the age group that has put the young and middle-age to shame.

A study, undertaken by University College London (UCL), examined exercise data from people aged between 14 and 93 and found a material difference in activity levels between the various age groups, especially comparing the youngest and oldest. The researchers tracked the activity levels via a smartphone app, before, during and after the restrictions were introduced. Hannah McCarthy, one of the co-authors, said “We found significant changes in physical activity from the week before the first case of Covid-19 was announced.”

The data clearly showed that Boldies over 65 set the ‘bar’ for us all, by increasing their exercise levels, the only age group to do so during these strange times. The data showed that except for the over 65s, the UK population in the main walked, jogged, cycled, and did less exercise than they had before the pandemic. Despite the increased opportunity that time in lockdown provided.

Physical activity is not just good for our physical wellbeing but also our mental health. With the end of the second UK lockdown nearing and the weather still permitting now is the time to just get out and do something; anything. Yes, we mean it – right now. Go for a walk, jump on a bike, walk up and down the stairs, lift some weights, follow a workout on YouTube (check out our channel for some suggestions). You’ll feel better for it. Now it’s time for us Boldies over 50 to follow Margaret’s example and increase our own fitness levels, and have fun while doing it.