1960s: Our favourite TV shows of the decade 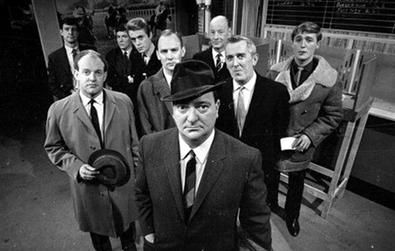 Continuing our trip down memory lane

For the first half of the decade most of us watched programmes in black and white. From the mid-60s the lucky amongst us would huddle around the TV set and watch in colour, though in our house it didn’t make an appearance until the 70s. So what were we all watching.

Soaps, which were becoming popular in the USA hadn’t yet taken off in the UK. that said Coronation Street was launched in December 1960. It was the age of Variety though with The Royal Variety Show leading the ratings for a good part of the early 60’s. It first hit the small screen in 1960 with the indomitable Bruce Forsyth as the compere, leading acts such as: Cliff Richard and the Shadows, Nat King Cole, Max Bygraves and Diana Dors. One of the most iconic variety shows was in 1965 with a veritable smorgasbord of comedy talent on show in – Ken Dodd, Peter Cook, Dudley Moore, Spike Milligan and Peter Sellers.

The 1960s was for many, a golden age of sitcom, with the birth of many classic programmes that launched many a household name and who went onto have long and extremely successful careers. One of the most iconic was Dads Army which marched onto our screens in 1968 and never stopped marching until 1977, completing 9 series and 80 episodes.

The writing duo of John Esmonde and Bob Larbey, who’d go on to write for Richard Briers in The Good Life and Ever Decreasing Circles, Struck gold with Please, Sir! .

This sitcom followed the adventures of newly-qualified teacher Mr Hedges, played by fresh-faced John Alderton. Who tried his best to tame and unruly bunch of kids from Fenn Street Secondary Modern.

Each year during the Sixties brought more comedy successes, such as The Liver Birds and Till Death Us Do Part, Father Dear Father and On The Buses.

Emergency Ward 10 lead the way in 1960 as the top drama. However, we saw real imagination with the launch of seminal works like: The Prisoner, or Danger Man. The Prisoner was particularly bizarre with its blend of sci-fi and political suppression

Other successful dramas of the day that enjoyed success in the 1960s include The Doctor Finlay’s Casebook, Z Cars and the Avengers. The latter spawning shows like the The Champions and Department S.  Then there was ‘Cathy Came Home’ which prompted questions in the House of Commons and was later voted as being the best ever British drama in 2009.

In this last clip we provide a round-up of some of the best shows on TV in the 1960s. We hope you enjoy the trip down memory lane.